Nigeria takes lead in exploration, production and regulation in 2022 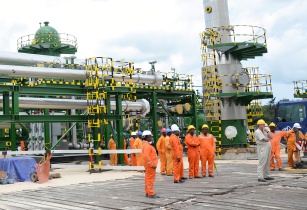 Nigeria is set to maintain its position as one of Africa’s leading crude oil producers as well as one of the continent’s top three gas suppliers between 2022 and 2025, the African Energy Chamber’s (AEC) Q1 2022 outlook

According to the outlook, Nigeria will produce 1.46 mmbbl per day of crude oil out of the 6.35 mmbbl per day that Africa as a whole will produce during the year, reaffirming the country’s position as a continental energy hub as production in the West African state peaks in 2023.

In order to consolidate its position as a global producer, the Nigerian government needs to fast-forward the approval process for deep-water projects and put in place policies that reduce taxes for operators, the majority of which are international majors that have partnered with national oil companies, to ensure more projects come online through 2025 for a continued stable supply of crude oil.

Accordingly, the US$12bn Dangote refinery project in Lagos, slated to kickstart operations during Q4 of 2022 with a processing capacity of 540,000 barrels per day and partly owned by state-company the Nigerian National Petroleum Corporation, is an example of the willingness of Nigeria to set itself as an oil heavyweight while expanding its oil and gas capabilities to meet domestic, regional and global energy needs.

Meanwhile on the gas front, the AEC outlook shows that Nigeria has also retained its spot amongst Africa’s main gas producers in 2022. An annual production capacity of 1,450 bcf is expected as the country recovers from 2020 low production levels. Existing gas producing fields, as well as those currently under development, are expected to sustain the country’s gas production through to 2025.

The implementation of the Petroleum Industry Bill (PIB) in 2021 by the Nigerian government, for example, provides regulatory clarity on royalties and other issues that have previously made it difficult for oil and gas E&P companies and downstream market players to expand investments within the country’s market.