Surging oil, gas and power prices together with the European Union (EU)’s goals of becoming less dependent on Russian supplies and post-Covid-19 pandemic inflation will catapult global energy spending this year to US$2.1 trillion, according to Rystad Energy

A concern in energy markets is that the ongoing war in Ukraine will derail the energy transition, but the latest data suggests that spending in green energies will grow faster than in the fossil fuel sector. Without the invasion, however, there would have been less growth in investments in oil and gas and the share of green energies in global energy spending would be slightly more than today’s 31%.

Upstream oil and gas spending is now projected to grow 16% – or US$142bn – compared to last year as oil and gas producers around the world up their investment budgets to increase output.

Another important factor pushing energy spending to new highs is the global inflation of material prices, labour costs and shipping rates caused by the pandemic and the sanctions imposed on Russia. Compared to 2020 levels, project costs in oil and gas have increased by between 10% and 20%, due largely to steel price rises and a tighter market among suppliers. Within renewables, lithium, nickel, copper and polysilicon – which are all important materials in battery and solar PV manufacture – have sent renewable project costs up by between 10% and 35% within the same timeframe.

“The world is now spending more on energy than ever before. The year 2014 was the last time we saw similar numbers. One can see a major shift in the amount of spending on green energy, which has increased, with a drop in expenditure on oil and gas. However, expenditure on other fossil fuels, such as coal, has remained constant,” said Audun Martinsen, head of energy service research at Rystad Energy. 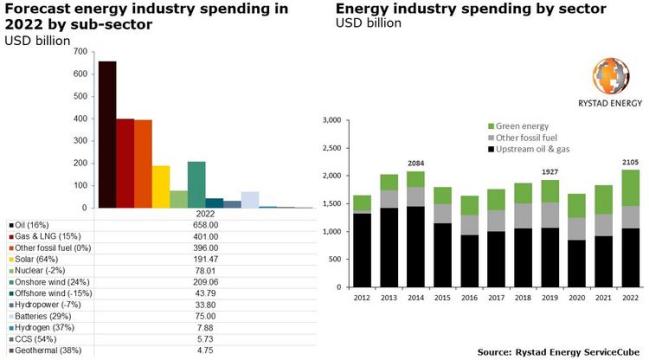