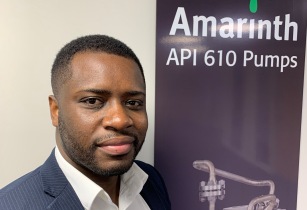 Amarinth is a leading company specialising in the design, application and manufacture of centrifugal pumps and associated equipment to the oil and gas, petrochemical, LNG, chemical, industrial, power and desalination markets.

Africa has seen a surge in new oil and gas projects over the past few years with challenging projects being planned or delivered, such as:

-Bongo FPSO Deepwater Project 120km south-west of the Niger Delta in a water depth of over 1,000m.

-Lake Albert Development Project in Uganda which expects to achieve around 230,000 bopd.

-Train 7 LNG project in Nigeria which will increase the NLNG facility’s production capacity by 35 per cent.

Amarinth has a strong track record of working in close partnership supporting EPCs and contractors around the world who require class-leading products, often with a bespoke design on short lead times, as underlined by the company’s on-going investment in staff and offices for the Middle East and the Asia Pacific.

To date, Amarinth has been supporting EPCs and contractors delivering projects in the Africa Territory with existing sales staff based in its UK headquarters. However, the company has decided that the time is right to appoint a dedicated permanent sales manager for the Africa territory.

Itai Choto will split his time between bases in Nigeria and London as needed to deliver support to end-users, EPCs and contractors working on projects in Africa. Initially, Itai will be focused on the countries where Amarinth believes its expertise and products are in most demand, including Nigeria, Algeria, Uganda, Mozambique,

Oliver Brigginshaw, managing director of Amarinth, commented, “We have seen strong growth in demand for our products from EPCs and contractors delivering against the challenging projects currently being undertaken in the Africa Territory. We always strive to deliver localised support where we can, as in the case of our established Middle East and Asia Pacific territories, and so we are delighted to now be in a position to announce the appointment of Itai Choto who will enable us to better support all of our customers working in the Africa territory.”