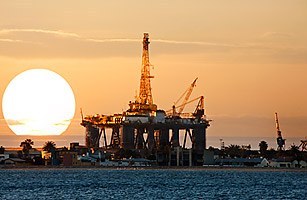 A well drilled immediately east of the Jubilee field has found a large new field, which is already being tipped as the country’s third producer. Kosmos, the US company which discovered Jubilee, said its Akasa-1 well found an oil reservoir 33 metres deep, holding light crude of 38°API. Water-depth at location is 1,158 metres.

Akasa – previously called Dahoma Updip – lies only about 7 kilometres from the edge of the Jubilee area, and about 15 kilometres south of the Teak structure, found last year. Initial expectations are that Akasa and Teak will be a joint development. Teak has already seen two wells, and a two-well appraisal and testing programme is about to start. Also nearby is the Mahogany East structure, where delineation drilling is scheduled for next year. The Odum and Banda finds lie just to the east.

The Feed contract will examine production capacities in the range 75,000-125,000 barrels/day, with gas injection and gas cycling to maximise recovery of the reservoirs’ condensates. Development approval is due to be sought in the first half of next year, with first production targeted within two-and-a-half years of approval. Another appraisal well, Enyenra-3A, was drilling in September and the drilling of Enyenra-4A is scheduled.

Meanwhile, production from the Jubilee field, on stream since November, is soon to rise to 105,000 barrels/day, with the hook-up of the final production well in October. The planned plateau rate of 120,000 barrels/day should be reached by the end of the year, after a production well which has not been flowing fully has been sidetracked. The next phase of the Jubilee development, Phase 1A, is due to start early next year, adding eight new wells. Phase 1A is designed to keep the field flowing at the plateau rate until about 2015.

NAMIBIA’s low-key exploration effort has been given a lift by new interest from two large exploration operators. BP has agreed to farm-in to a block in the southern offshore, for which Petrobras recently exercised an option to take over the operatorship. As a result, an exploration well is being scheduled for next year in the area, Block 2714A.

The well will be into the large Nimrod structure, on which there is said to be good seismic data and which is expected to hold oil rather than gas. According to seismic mapping, Nimrod could hold up to 4.9 billion barrels, and there are direct hydrocarbon indicators (oil seeps) over the structure, raising the hopes of success. A 3-D seismic survey over Blocks 2714A and 2714B has shown 11 drilling prospects. Water-depths over the structures are in the range 400-850 metres, so lower-cost semi-submersible drilling rigs could be used for the shallower prospects.

Namibia’s only discovery is the Kudu gasfield, which is still undeveloped, 37 years after being found. The field is now operated by Tullow, which has plans to land the gas to supply a power station to be constructed in the south of the country. The company says it is negotiating commercial arrangements, and has a target of making a final investment decision in the middle of next year.

The deep-water Pazflor field started flowing in late August, ahead of schedule. The operator, Total, says Pazflor holds reserves of 590 million barrels and is due to flow at a plateau rate of 220,000 barrels/day, to be reached early next year. Heavy crude from three reservoirs and light crude from a fourth are produced separately to the FPSO and mixed for export. Pazflor uses the first ever field-lifetime subsea separation units – seabed units which separate gas from the heavy crude, allowing the crude to be pumped to the FPSO without the risk of hydrate formation.

African Petroleum, an Australian company, found oil shows with its Apalis-1 well – the first deep-water well drilled off Liberia. Geological data confirmed the presence of a working petroleum system. Another well is to be started before end-year. African Petroleum says seismic work has shown more than 25 exploration prospects in its two 100 per cent -held areas, Blocks LB-08 and LB-09.

The first appraisal well to be drilled at the cluster of deep-water gasfields – Windjammer-Barquentine-Lagosta – found a net 70 metres of gas zones. The operator for the area, US firm Anadarko, said the result of the Barquentine-2 well confirmed its seismic modelling and supported a reserves estimate of at least 170 billion cubic metres for the cluster. Anadarko is moving forward with plans for a liquefied natural gas export scheme for the three fields, awarding contracts for initial design work to KBR and Technip.