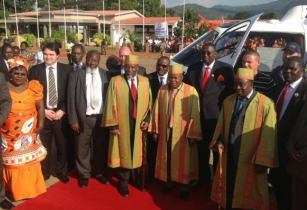 The Exclusive Prospecting License (EPL) 0360/2012, which covers an area measuring 346 sq km in the country's southern Chikhwawa District, has been designated for shale gas and coal bed methane exploration.

The survey will be conducted by New Resolution Geophysics and will use specialised equipment to measure the natural magnetic field in order to determine the depth and structure of sediments in the Mwanza river basin.

Initial field geological surveys were completed in November 2012. This latest survey, which will fly 6,000 1km lines spaced 250 metres apart, has been scheduled to last for a period of 12 days and will target Karoo basin carbonaceous coal shale formations.

NuEnergy chairman Graeme Robertson, who described the programme as a "significant development" for Malawi, said, "We are delighted to commence the airborne geophysical survey in Malawi over the potentially significant Karoo shale formation contained within our license area.

"Malawi is an under-explored emerging country rapidly gaining acceptance through its government reforms and with major World Bank and IMF support. The country possesses significant unsupplied demand from its transport and power sectors and we remain very optimistic about the development potential of EPL 0360/2012."

The Indonesian- and African-focussed energy company confirmed that independent geophysicists from JMJ Petroleum would verify all survey data on a daily basis for the duration of the survey.