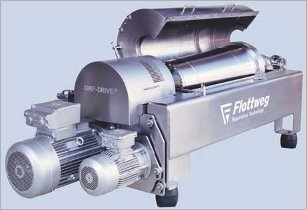 IN 1956 THE GREAT oil rush began in Algeria, and since that time oil has been coming out of many drilling sites in and around Hassi Messaoud, from a depth of approximately 3000 m

The extraction and the export of oil and gas are a boon to the Algerian economy since they provide more than 97 per cent of foreign exchange proceeds.

When drilling for oil and gas, tons of drilling mud are generated – a mixture of sand, oil, and chemicals. Drilling fluids, a kind of mash, is used in order to pump the sludge to the surface. This fluid is also used as lubrication and a cooling agent for the drilling head. These drilling fluids are quickly contaminated with sludge and residual oil which means that they have to be continuously cleaned in order to guarantee a smooth drilling process. After the drilling fluids have passed through a rough sieve and after polymer and rinsing liquid have been added, the coarse solids are separated using a powerful Flottweg decanter. The liquid phase can be re-introduced into the drilling process and thus the usage of fresh water and chemicals can be reduced.

Flottweg had a loyal customer for many years in the Algerian oil and gas industry, a service company which had bought Flottweg decanters for drilling mud treatment ten years ago. In July 2010, this customer ordered four additional decanter skids which were delivered in September. In Spring 2011, another six identical skids were manufactured for him. These are explosion-proof Z4E decanters with a hydraulic drive and electrical cabinet, completely assembled and connected on a skid. The unit is completed by a height adjustable and accessible base frame.

Since all ten Flottweg decanters are used for the same application, a high degree of standardisation was possible for these systems, approaching series production. Although Flottweg have a worldwide reputation for being able to adapt their systems to specific customers needs, and will certainly continue to offer this service, it is altogether easier, smoother, and thus more economic to produce standard systems.