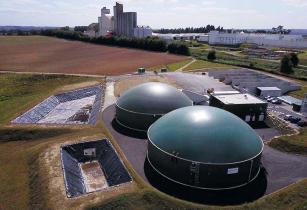 The plant was planned and set up by the German manufacturer in collaboration with its French partner WELTEC France. Some 200 standard cu/m per hour of biomethane are generated from production waste and sludge from the company‘s wastewater treatment plant. This corresponds to the gas consumption of a town with a population of 5,000.

Christophe Chrétien, managing director of the biogas plant of SOBER, said, “The biomethane production is in line with the CSR (corporate social responsibility) policy of ALTHO, which holds more than a third of the market share with its chips brand “Bret‘s”. Via the ALTHO subsidiary SOBER, which operates the biogas plant, we actively participate in recycling, producing a green energy source from waste. Additionally, we contribute to the reduction of greenhouse emissions and the energy dependence of the region.”

The chips production yields 22,000t of leftovers and sludge a year. Potato and starch leftovers, as well as other production waste, account for about half of the substrate; the rest is made up of the sludge from the washing process. First, the solid and liquid substrates are mashed and shredded in the sturdy MULTIMix input system. After this pre-processing, the mixture is fed into the stainless-steel digester, which has a capacity of 4,436 cu/m. A post-digester with the same capacity is the last step in the material cycle. Subsequently, the digestate is sold to local farmers, who use it as high-quality fertiliser.

The process that transforms the biogas into biomethane also stands out with its sustainability: To condition the biogas, WELTEC BIOPOWER has integrated the membrane technology in a compact container solution.

Alain Priser, who is responsible for WELTEC‘s business in France, added, “In the container, the raw gas passes through special membranes that separate it from carbon dioxide, steam and other components. The three-stage separation, which has already been successfully employed in other WELTEC plants, reduces the methane slip to less than 0.5 per cent.”

Another major benefit is that thanks to the upstream compression, the methane has exactly the right pressure that it needs to be fed into the natural gas grid without any further compression. The separation takes place at ambient temperature and without using any chemicals.