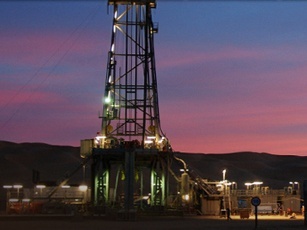 The AT-8 probe produced flows of 15.4mn cu ft per day, even before fracture stimulation, from an Ordovician reservoir at the field in the Petroceltic-operated Isarene permit in south-east Algeria.

It was intended to test the extent of the hydrocarbon column to the north of the field in a previously undrilled area.

“These results confirm the potential for good productivity towards the north of the field, are likely to have a positive impact on our estimate of recoverable gas reserves and are very encouraging for the ultimate commercial development of Ain Tsila,” said Petroceltic chief executive Brian O’Cathain.

The well achieved the highest pre-frac flow rate seen to date on the field and is now being prepared for fracture stimulation.

Petroceltic is drilling ahead with the sixth appraisal probe of its current programme with logging and testing scheduled before year-end, when it also expects results from both the AT-7 and AT-8 wells.

Petroceltic operates the permit with a 56 per cent interest with Algerian state oil company Sonatrach on 25 per cent and Enel on 18 per cent, subject to government ratification.