In alliance with the US National Oceanic and Atmospheric Administration (NOAA) and the Colorado School of Mines, the World Bank’s Global Gas Flaring Reduction Partnership (GGFR) has developed global gas flaring estimates based on satellite observations 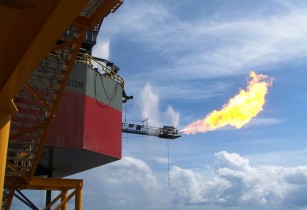 Russia, Iraq, the US, and Iran continue to account for nearly half (45 per cent) of all global gas flares. (Image source: Ken Doerr/Flickr)

Estimates from satellite data show global gas flaring increased to levels not seen in more than a decade, to 150 billion cubic meters (bcm), equivalent to the total annual gas consumption of sub-Saharan Africa.

Gas flaring in fragile or conflict-affected countries increased from 2018 to 2019: in Syria by 35 per cent and in Venezuela by 16 per cent, despite oil production flattening in Syria and declining by 40 per cent in Venezuela.

Gas flaring, the combustion of natural gas linked to oil extraction, occurs due to technical, regulatory and/or economic constraints. Each year, it results in more than 400 million tonnes of CO2 equivalent emissions and waste a valuable resource, with harmful environmental impacts from uncombusted methane and black carbon emissions.

“Our data suggests that gas flaring continues to be a persistent problem, with solutions remaining difficult or uneconomic in certain countries,” said Christopher Sheldon, practice manager in the energy and extractives global practice, World Bank. “The current COVID-19 pandemic and crisis brings additional challenges, with sustainability and climate concerns potentially sidelined. We must reverse this worrying trend and end routine gas flaring once and for all.”

For three years running (2017-2019), the top four gas flaring countries (Russia, Iraq, the US, and Iran) continue to account for nearly half (45 per cent) of all global gas flares.

“We are garnering more commitments from governments and companies to end routine flaring through the Zero Routine Flaring by 2030 initiative. Now more than 80 governments and companies, accounting for over half of the world’s routine flaring, have pledged to end this 160-year-old practice,” said Zubin Bamji, programme manager of the World Bank-managed GGFR Trust Fund.