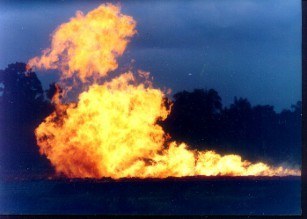 GE HAS RELEASED a study, Flare Gas Reduction: Recent Global Trends and Policy Considerations, which estimates that five per cent of the world's natural gas production is wasted by burning or "flaring" unused gas each year—an amount equivalent to 30 per cent of consumption in the European Union and 23 per cent in the United States.

The study finds that the technologies required for a solution exist today. Depending on region, these may include power generation, gas re-injection (for enhanced oil recovery, gathering and processing), pipeline development and distributed energy solutions. Nearly $20bn in wasted natural gas could be used to generate reliable, affordable electricity and yield billions of dollars per year in increased global economic output.

"Power generation, gas-reinjection and distributed energy solutions are available today and can eliminate the wasteful practice of burning unused gas. This fuel can be used to generate affordable electricity for the world's homes and factories," said Michael Farina, program manager at GE Energy and author of the white paper.

"With greater global attention and concerted effort—including partnerships, sound policy and innovative technologies—large-scale gas flaring could be largely eliminated in as little as five years. It's a win-win outcome," continued Farina.