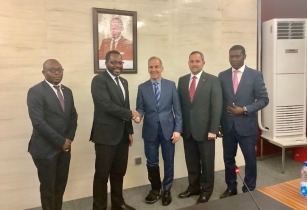 The Atlantic Methanol Production Company (AMPCO), which runs one of Africa’s largest methanol plant on Bioko Island in Equatorial Guinea, has decided to invest in the expansion and diversification of the country’s downstream sector

Following the discussions in Malabo this week and its support to the Year of Investment initiative, AMPCO has decided to work with the Ministry of Mines and Hydrocarbons to create a methanol-to-gasoline and derivatives unit to further monetise domestic gas produced in Equatorial Guinea.

The company has also agreed to work on the development of a formaldehyde production unit.

This was discussed during a meeting in Malabo this week between Paul Moschell, president of AMPCO, and Gabriel Mbaga Obiang Lima, minister of Mines and Hydrocarbons.

Gabriel Mbaga Obiang Lima said, “Our focus is on increasing overall value by strengthening our upstream business and further integrating it with the downstream and chemical segments. We believe in working with long-term partners and welcoming new partners who bring on board a value-added proposition to our industry and country.”

Like Marathon Oil, AMPCO will provide the necessary support needed to the building of a modular refinery on Bioko Island, in line with the Ministry of Mines and Hydrocarbons’ plan.

AMPCO is operated by Marathon Oil Corporation, which owns 45 per cent of the plant along with Noble Energy (45 per cent) and state-owned SONAGAS (10 per cent). The plant has been running successfully for about two decades and has the potential to significantly contribute to the growth of Equatorial Guinea’s downstream industry.