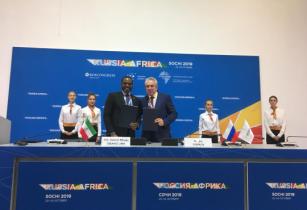 Rosgeo and the Ministry of Mines and Hydrocarbons of Republic of Equatorial Guinea have agreed to cooperate in airborne geophysical operations, 2D and 3D regional seismic survey in transit and deep water offshore zones

In this regard, Sergey Gorkov, director-general and chairman of the Board of Rosgeo, and Gabriel Mbaga Obiang Lima, minister of Mines and Hydrocarbons of Equatorial Guinea, have signed a memorandum of understanding (MoU) during the Russia-Africa Summit in Sochi.

Rosgeo’s return to Equatorial Guinea under this cooperation agreement will materially improve our understanding of the country’s subsurface, unlocking new prospects and boosting our oil and gas reserves, Gabriel Mbaga Obiang Lima.

The parties will work closely in the processing and interpreting of seismic data (including gravity and magnetic survey, electrochemical and geochemical studies), engineering studies and other works, said the statement.

In another development, Vagit Alekperov, president of LUKOIL, and Gabriel Mbaga Obiang Lima, minister of Mines and Hydrocarbons of the Republic of Equatorial Guinea, have signed an MoU at the same summit.

The memorandum lays the basis for LUKOIL’s potential participation in projects to explore and produce hydrocarbons in Equatorial Guinea.

Active in Africa since 1995, LUKOIL develops projects mainly in West and Central African countries – Ghana, Cameroon, the Democratic Republic of Congo and Nigeria.