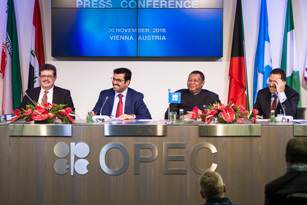 OPEC reached agreement to cut production by around 1.2mn bpd to bring the ceiling down to 32.5mn bpd, effective 1 January 2017 “in order to accelerate the ongoing drawdown of the stock overhang and bring the oil market rebalancing forward”, according to an OPEC statement. The cuts are shared across the cartel with Saudi Arabia bearing the brunt, taking a production cut of 486,000 bpd, while Iraq, contrary to earlier indications, will reduce production by 210,000 bpd. Iran, however has been permitted to increase production slightly from its October level as it looks to regain market share lost during years of sanctions, while Libya and Nigeria are exempt. Indonesia, a net oil importer, has suspended its OPEC membership as it could not commit to cutting production.

A ministerial monitoring committee consisting of Algeria, Venezuela, Kuwait and two participating non-OPEC countries will monitor deal implementation and compliance, working closely with the OPEC secretariat. The “adjustments” as they are described by OPEC, will be reviewed at the next OPEC meeting in May with a view to extending them by another six months.

According to the OPEC statement the agreement has been reached following “extensive consultation and understanding” with key non-OPEC countries. At an OPEC press conference, |Dr Mohammed bin Saleh Al-Sada, Qatar’s minister of Energy and Industry and president of the OPEC Conference, said that the agreement is subject to a 600,000 bpd reduction from key non-OPEC producers, and that Russia (which only recently had announced that it would freeze rather than cut production), has agreed to a production cut of 300,000 bpd. Other non-OPEC countries have shown “support and pledges” to meet the 600,000mn bpd target, he said, with a meeting with non-OPEC producers scheduled for 9 December.

In its statement OPEC notes that market rebalancing is underway, but inventories are still well above the five year average, and that it is vital that stock levels are brought down to normal levels. It also notes the drop off in investment levels in both 2015 and 2016 and the importance of continued investments to provide the necessary supply in the medium- and longer-terms. Dr Al-Sada hailed the agreement as a “major step” which will help to rebalance the market and reduce the stock overhang, as well as helping the industry to revive and reinvest in oil production capacity, and paid tribute to the “co-operation and understanding” of all member countries.

The deal has received a mixed reaction from analysts, with some forecasting that any price rise may be short lived, with US producers likely to take advantage of the oil price rise to boost production, and that the production cut is insufficient to make much of a dent in the supply glut. “The deal will certainly provide some short term market price boost. But, disagreements persist among OPEC members on how to measure production, so the deal will be hard to police,” comments Spencer Welch, director at IHS Energy. OPEC members have something of a record of producing beyond their allocated quotas.

However the fact that OPEC has succeeded in reaching an agreement at all when previous attempts have failed, in a reversal of its previous strategy to maximise production and market share, as well as seemingly winning the support of key non-OPEC suppliers for a production cut, has confounded the sceptics and signals that OPEC is still a force to be reckoned with in the oil market.