The East African crude oil pipeline (EACOP) is facing a fresh backlash as a climate research body revealed in a study that the project will emit as much as 379m tonnes of climate-heating pollutants, that is 25 times of what Uganda and Tanzania – combined – make annually 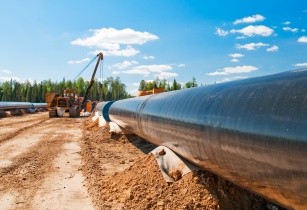 The pipeline is expected to be completed in 2025. (Image Source: Adobe Stock)

The pipeline, which is designed to run 1,443 km long, from oil fields near Lake Albert in Uganda to Tanga Port in Tanzania, is expected to be completed in 2025. It is financed on a 60-40% debt-equity split, drawing the primary source from lenders, following which, the shareholders – TotalEnergies, Uganda National Oil Company, Tanzania Petroleum Development Corporation and CNOOC – would bring in the remainder through equity contribution.

The Afriexim Bank and the Islamic Development Bank promised US$200mn and US$100mn respectively to fund the US$5bn project. Standard Bank Group, through its Ugandan subsidiary Stanbic Bank, is one of the transaction advisors for the financing of Eacop, whose cost jumped from US$3.5bn to approximately US$5bn, after major stakeholders dropped out of the project. To date, they have added up to 24 banks and 18 insurance companies.

The European Union called for the project to be stalled last month, on human and environmental rights violation grounds. The governments of both Uganda and Tanzania, however, are rooting for the project to materialise. They consider it a means to pull the countries out of poverty. According to them, Africa has only emitted 3% of greenhouse gases compared to 17% from EU countries.

"Unlike wealthy nations which will remain wealthy even when their oil and gas revenue is removed, we cannot afford to gamble the future of Ugandan generations on hypotheticals," said Elison Karuhanga, a member of Uganda Chamber of Mines and Petroleum.