STRYDE to enable oil and gas exploration in Africa 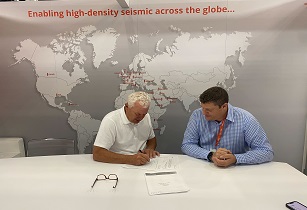 STRYDE, a seismic technology provider, has signed a new contract with Polaris Natural Resources to enable efficient oil and gas exploration in Africa

Following the successful use of the STRYDE nodal system in Namibia and Zimbabwe, STRYDE has signed a contract for the use of the system to acquire high-density subsurface data for cost-effective oil and gas exploration in Africa.

The seven-figure contract was signed at the International Meeting for Applied Geoscience & Energy (IMAGE) in the USA and will see Polaris purchasing a 13,000-node system from STRYDE.

This follows high-density 2D seismic data being successfully harvested from STRYDE nodes in Zimbabwe earlier this year, before being sent for processing and interpretation, enabling an independent oil and gas operator to identify and mature additional prospects in the Cabora Bassa Basin. Drilling of the Muzarabani-1 well is now underway, with the prospect considered to be the largest undrilled conventional oil and gas prospect onshore Africa.

Bill Mooney, chief executive officer at Polaris, said, “We required a seismic imaging system that was low-cost but wouldn’t compromise the quality of the output dataset.

“STRYDE was able to deliver this through the use of their compact Nimble System and we were pleased to see significant cost savings and operational efficiency gains unlocked. As a direct result of using STRYDE nodes we were able to reduce the size of the survey crew and decrease the number of vehicles and logistics required, and therefore the project timeline and associated costs and risk.”

Due to the miniature size and agility of the STRYDE nodes, Polaris was able to deploy and retrieve thousands of nodes per day, minimising the need for line clearing and land disruption, resulting in being able to shoot the survey in the most efficient way possible.

Mooney explained, “This resulted in the acquisition of high-resolution and deep structure data that allowed us to deliver the subsurface insights required to make informed drilling decisions to our client, to help end energy poverty in Zimbabwe.”

Signing the contract on behalf of STRYDE, chief executive officer, Mike Popham, added, “We are delighted that following successful projects together during 2021, Bill and his team at Polaris have decided to proceed with purchasing our Nimble System. It serves as further proof that our nodal system is fundamentally changing how land seismic is acquired, reducing the environmental impact while enabling higher density, more affordable seismic acquisition. Polaris customers will in turn benefit from a radically improved understanding of the subsurface, leading to far greater returns on both untapped, and existing reservoirs.

“This is another exciting step forward for STRYDE in Africa, and across the globe and we’re very proud to sign together at this year’s IMAGE conference and exhibition.”