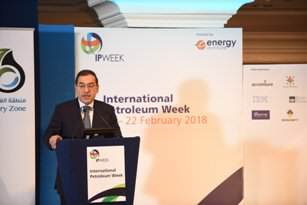 Egypt’s plans to become an energy hub will bring benefits to Egypt and the region as well as contributing to Europe’s energy security, said HE Tarek El  Molla, Egypt’s Minister of Petroleum and Mineral Resources

Giving a keynote address at IP Week in London on 22 Feburary, the Minister said that Egypt is working to transform its oil and gas industry into a world class sector with the highest standards, under the framework of the Vision 2030 programme. A core element  is turning Egypt into an energy hub – a regional centre specialising in oil and gas, from which energy can be exported, whether from Egypt’s own resources or from neighbouring countries.

The minister said that this strategic  decision is based on three important factors – Egypt’s strategic position, which gives it the potential to transit, store, blend and trade both crude and refined products; the strength of the domestic market; and potential competitive advantage.

“Once the largescale storage and blending facilities for crude oil and refined products are complete, with delivery options to eastern and western markets, this will attract neighbouring players in the supply chain to optimise their own positions by trading into and out of the hub,” he explained.

Outlining the steps Egypt is taking to fulfil its ambitious plans, the Minister said, “At a domestic level, Egypt has taken bold steps to reform the gas market, issuing a new gas law which mandates the establishment of an independent gas regulator as well as an intergovernment committee to facilitate challenges.

“There are various infrastructure projects under study or underway in the Red Sea and Mediterranean, along with the construction of marine platforms and storage facilities. Egypt has huge existing refining capacity in addition to pipeline networks for transporting refined products and natural gas throughout the country, which are being upgraded and extended. Egypt has two LNG plants, maximising the flow of natural gas. In addition, recent gas discoveries and developments in the Mediterranean have opened horizons for more discoveries and cooperation with neighbouring producers. The first successful result of such cooperation has been announced this week, between partners of Israel s Tamar and Leviathan offshore gas fields and an Egyptian company to supply 64 bcm of gas over the next 10 years.

“This is a big step in monetising Eastern Mediterranean gas discoveries and building Egypt into an energy hub, in line with the new gas law which opens the Egyptian market to private sector companies,” he commented.

He added that Egypt is in discussions with regional stakeholders, and that Egypt’s ambition to become a regional hub is in line with the EU’s energy strategy. An updated MoU of energy with the EU will be signed this year whereby the EU will be the main consumer of energy transported and traded from Egypt. There are also ongoing discussions on a pipeline between Cyprus and Egypt and “robust” cooperation between Egypt and Jordan, as illustrated by the latest MoU signed between Egypt, Jordan and Iraq to cooperate in transporting gas and crude from Iraq via Jordan to Egypt.

“Energy is a win win opportunity for regional cooperation and new political partnerships,” the minister concluded, saying that the creation of a regional energy hub would benefit all players, adding value to Egypt’s infrastructure and creating new job opportunities as well as contributing to Europe’s energy security. “We are committed to this goal and ready to implement all necessary reforms to achieve it.”