BW Offshore are to operate the Kudu license offshore Namibia 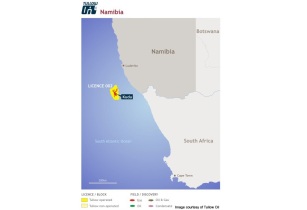 BW Offshore have signed the deal to become operator of the Kudu license offshore Namibia. The company's subsidiary, BW Kudu, will take over the license, with the Namibian state-owned oil company National Petroleum Corporation of Namibia (NAMCOR) holding on to the remaining 44 per cent.

"BW Offshore will now start the work with the Namibian government, NAMCOR, NamPower (the Namibian power utility), large infrastructure investors and other stakeholders to get this very exciting project to FID," said Carl K. Arnet, CEO of BW Offshore.

"Kudu represents another opportunity for BW Offshore to take a proactive development role in a project that will produce for 15-25 years. Falling development costs after the 2014 drop in oil prices has helped in making the project economically feasible,” added Carl K. Arnet.

NAMCOR Managing Director Immanuel Mulunga said the project will play a fundamental role in shaping the energy dynamics of Namibia.

"The Kudu Gas-to-Power Project is a key strategic power generation project for Namibia, which will significantly reduce reliance on imported power while at the same time accelerating economic development,” Mulunga said. "The Kudu Gas to Power Project will not only enable Namibia to entirely cater for its own power needs but become a net exporter of power to regional markets.”