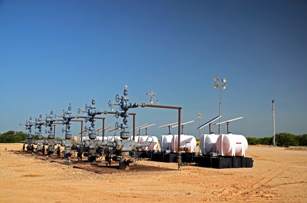 Rival leaders of Libya’s National Oil Corporation have reached an agreement to unify the state company under a single management, a move which could help to revive the country’s embattled oil sector as well as boosting the prospects of the UN-backed unity government and its Presidency Council

According to a statement on the NOC website, Mustafa Sanalla, the head of the NOC in Tripoli, will become chairman of the unified company, which will be based in Benghazi in the east. Sanalla’s eastern Libya counterpart, Dr Nagi el-Maghrabi, will join the NOC board.

“We made a strategic choice to put our divisions behind us and to unify and integrate NOC,” Sanalla said in the statement. “This agreement will send a very strong signal to the Libyan people and to the international community that the Presidency Council is able to deliver consensus and reconciliation. I’m sure it will now build on this success to bring unity and stability to other government institutions.”

The statement says that the two sides have jointly agreed a unified budget for the remainder of the financial year and have agreed to make rehabilitation a priority, especially in Benghazi in preparation for the relocation of NOC’s new headquarters. Sanalla further commented in an interview that the opening of the ports and the increase of production are top priorities.

Sanalla also stressed that one of the fundamental principles of the agreement is that Libya’s oil must be used for the benefit of all Libyans. “Funds from the sale of oil by NOC will continue to be paid to the Central Bank, and it is up to the Presidency Council and House of Representatives to ensure that the money is distributed fairly, including to cover NOC budgets,” he said.

Libya split into separately governed regions in 2014, leading to the establishment of rival NOC administrations. This, along with attacks by armed factions and the incursions of Islamic State, has had a devastating impact on the country’s oil sector. A number of oilfields and export terminals remain closed, with the result that the country’s crude production has dropped from around 1.6mn bpd before the fall of the Gaddafi regime in 2011, to around 300,000 bpd currently. Libyan officials say supplies could rise towards 700,000 bpd by the end of the year, provided the eastern ports of Ras Lanuf and Es Sider are re-opened.