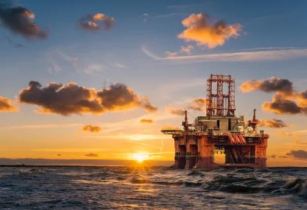 In November, West African coastal nations are set to join Africa Oil Week, the continent’s premier oil and gas conference that has moved temporarily to Dubai as a Covid-19 safety precaution but has committed to return “home” to Cape Town, South Africa in 2022

Hot on the heels of oil majors either exiting or cutting back their activities in West Africa comes news of other players moving to fill the gap – in the coastal countries of Sierra Leone, The Gambia and Ghana, for instance.

• The Gambia’s minister of energy and petroleum, Fafa Sanyang; commissioner for petroleum in the Ministry of Petroleum and Energy; Jerreh Barrow and the CEO of Gambia National Petroleum Company, Yaya Barrow

AOW’s vice-president of energy and director of government relations Paul Sinclair said, “AOW in Dubai is going to be a blockbuster. With the minister of energy for the UAE, Suhail Mohamed Al Mazrouei, confirming he will set out his commitments to West Africa and beyond, we can only see more success coming to the region, as a result of AOW 2021 in Dubai.”

Cluff’s new venture, Cluff Energy Africa, established two years ago, has already provisionally been awarded licenses covering 16,000 sq km in Sierra Leone with plans to expand across East and West Africa. He describes exits and divestments by the majors as an enormous opportunity to fill the gap.

Despite the volatility accompanying Covid-19, Cluff is confident that the rebound will see oil prices settle at a high watermark and, with the giants of the industry pulling out, a space has been left for smaller and nimbler companies to move in.

For Africa, with an electrification rate of only 43% compared to a global average of 87%, the challenge of the energy transition comes as countries grapple with how to deliver energy on a scale to drive growth and development.

In The Gambia, Australian company FAR and joint venture partner Petronas have contracted a deep-water drillship for an oil exploration well later this year.

The drillship Stena IceMAX will spud the Bambo-1 exploration well in October and November. If successful, a discovery could result in a standalone development which would be The Gambia’s first oil production The well is expected to take 30 days to drill to a planned total depth of 3 266 metres in water depths of 993 metres, 500 metres south of the Senegal-Gambia border.

“We are pleased to be recommencing exploration drilling at FAR with this high impact well in The Gambia and with the same drill team that drilled efficiently and safely for the Samo-1 well in 2018,” said FAR managing director Cath Norman.

“The well will be the first well to be drilled in the Mauritania, Senegal, The Gambia, Guinea-Bissau and Guinea-Conakry (MSGBC) basin since the collapse of the market in the wake of the oil price crash and the Covid-19 pandemic.

“A discovery of oil offshore Gambia would be extremely significant for FAR shareholders and the people of Gambia and help move Gambia out of ‘energy poverty’ and to transition from burning heavy fuel oil for power generation."

The upstream oil and gas business in Ghana recently received a boost when Eni announced that it has made a significant oil find offshore Ghana, close to its existing Sankofa hub, which would allow it to fast-track production. The Eban-1X well is the second well drilled in CTP Block 4, following the Akoma discovery. Preliminary estimates place the potential of the Eban-Akoma complex between 500 and 700 Mboe in place.