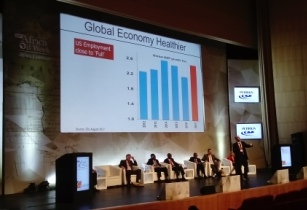 Daniel Silke, a  futurist and former member of the South African parliament, gave a lively keynote address on trends which could impact the continent's hydrocarbons industry at Africa Oil Week yesterday

He outlined the trends which oil and gas operators across the continent will need to take into account for strategic decision-making, including economic shifts, the cost and uncertainty of domestic political violence, militia activity, low rates of exploration, the continuing economic growth of China, and a young, increasingly urbanised population. Mr Silke also issued warnings to the delegates, such as rising interest rates in the US which could have an impact on loans taken out by African countries and operators in US dollars. He said that Africa is "heavily indebted" and this places "restrictions on doing business".

Other challenges for Africa which Mr Silke flagged up included the need to improve regulatory framework, overcoming corruption, and poor physical infrastructure.

"In 2016, FDI is down but capital investment is up so it's a mixed picture," said Mr Silke.

Despite issues surrounding debt, political violence and militia activity, Mr Silke said that Africa looks "relatively stable" in comparison to the uncertainty created in Europe by Britain's vote to leave the European Union, and the combined unpredictability of Donald Trump's presidency and Kim Kong Un's regime in North Korea.

"There is a move from reliance on commodities to a service-oriented economy," Mr Silke told the conference. He said that while there was "moderate growth" for commodities-led economies, other African countries, such as Ethiopia, Kenya and Tanzania were showing signs of growth in the service sector. While commodity growth is down, Mr Silke said that Africa could be a leader in the export of aluminium, cobalt, manganese and nickel to countries which need these materials for manufacturing, particularly in the electronics sector.

In line with one of the strong themes of the conference, Mr Silke said that trade between African countries is important for economic growth. He cited the example of the European Union, where 69 per cent of all trade is done between member states and south-east Asia, where trade between countries in the region is at 50 per cent. In contrast, only 18-20 per cent of trade in Africa is within the continent.

"Africa needs to trade more with each other," Mr Silke said.

Multiple speakers at the conference have talked about the increased presence of Chinese investment into Africa and Mr Silke said this is set to continue, particularly in regard to providing capital expenditure for projects: "China remains committed to Africa - it is the largest job creator on the continent."

The issue of providing access to electricity for more African households and businesses, another strong theme of Africa Oil Week, was raised by Mr Silke.

"We cannot talk about the future without talking about power," Mr Silke said. "In Africa, 620mn people have no power, this is the core issue. Power constraints will hamper growth."

"[Access to power] is where the [hydrocarbons] sector should be looking to the future - those people need to live."

Governments and operators also need to be mindful of the "shift away from oil" as a fuel for power generation, according to Mr Silke, with Africa "moving toward gas, renewables and hydro going forward".

"The industry needs to take advantage of these changing trends ... Natural gas is the great opportunity into the future."

Investment in infrastructure will also help develop the oil and gas industry in Africa with Mr Silke saying that this will cost an estimated US$721bn between 2013 and 2035. In regard to the young population across the continent, he said that bringing young talent into industries is "an essential challenge for all of us".