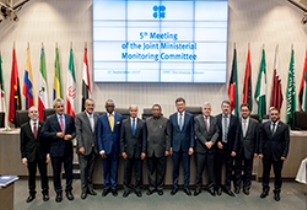 Brent crude oil prices have increased to the highest level in more than two years after an OPEC meeting in Vienna on 22 September 2017, at which producers stated that the global oil market is in a way of rebalancing

Global benchmark Brent crude rose 2.69 per cent to US$58.39 per barrel while the US benchmark West Texas Intermediate was up 2.19 per cent reaching at US$51.77 per barrel during the same period of time.

According to the OPEC meeting, the oil prices were up about 15 per cent in the last three months.

Issam A. Almarzooq, minister of oil and minister of electricity and water in Kuwait and chairman of the JMMC, said that the output curbs had helped in cutting global crude inventories to their five-year average.

“The destocking process has accelerated in recent months. The most recent data for August 2017 now shows OECD commercial oil inventories around 170 mmbbl above the five-year average. This compares to the beginning of 2017, when the level was 340 mmbbl above the five-year average. Moreover, floating storage has declined significantly in recent months,” he stated.

Te OPEC meeting has emphasised that all the participating countries need to remain steadfast and resolute in seeing through this market rebalancing process, in the interests of both producers and consumers, and the global economy as a whole.

“It is vital in helping to ensure a stable and secure energy future,” said Almarzooaq.