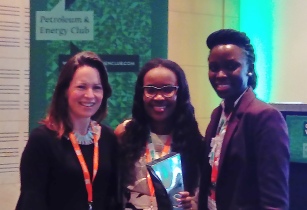 Namibia's oil and gas industry is still in the frontier stages but, according to Namcor leaders at Africa Oil Week, the prospects for the southern African country are promising

The work of Namcor, Namibia's NOC, in developing the country's hydrocarbons industry has not gone unnoticed with the NOC being awarded a gold seal by Deloitte following its survey on the best employers.At a government level, Maggy Shino, petroleum commissioner for Namibia's Ministry of Mines and Energy, was awarded the Global Women Petroleum & Energy Club Award Africa Oil Week today.

Immanuel Mulunga, managing director, Namcor, told Oil Review Africa that it is a "very exciting time" for Namibia, particularly with the calibre of investors that have been attracted. Tullow, Total, Chariot and ONGC already have a strong presence in Namibia and Mr Mulunga said that and announcement in regard to "a US super-major" can be expected soon.

The drilling campaign is expected to start by Q3 or Q4 2018. Namcor, as the NOC, will be participating in operations with a 10 per cent minimum stake. Namcor's working interest in one block is to provide 2D and 3D seismic data, while they have a 100 per cent owner-operator interest in Block 18-11B.

"We will work up and bring in bigger companies like everyone's doing," Mr Mulunga said. He is confident of oil discoveries in Namibia because of "very promising" seismic data.

In terms of funding projects, Mr Mulunga said that "briefcase companies" have been instrumental in providing finance as well as attracting big companies to Namibia.

The Kudu gas-to-power project, on which Namcor has partnered with BW Offshore, is an important part of Namibia's nascent hydrocarbons industry, reflecting the drive towards using African oil and gas for domestic energy security. FID is expected between December 2017 and June 2018. Mr Mulunga said that Nampower has a five-year contract with Eskom to provide cheap power to Namibia.

"Instead of building a big power station, we are looking at a smaller power station to meet the country's energy demand," he said. "Namibia has done well over the years with its electrification programme."

Namcor also has ambitious plans to grow the company from US$40mn to US$355mn over three years. This includes expansion into the retail sector with Namcor's first service station scheduled to open in December 2017.

Plans for exporting refined hydrocarbons are focused on neighbouring African countries, such as Botswana, Democratic Republic of Congo, Zambia and Zimbabwe, with the strategic location of operations at Walvis Bay making it a prime target for further develop as a hub for the industry.