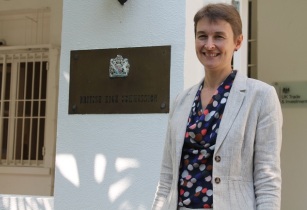 Leticia Klemens, the Mozambican Minister for Mineral Resources and Energy, attended the United Kingdom for a four-day official visit

Minister Leticia Klemens was a participant at the Subsea Expo 2017 conference and exhibition, which took place in Aberdeen, Scotland, from 1 - 3 February. This was central to Klemens' official trip to the United Kingdom.

The visit program included several meetings with representatives of the British government and the private sector in London.

The visit has been stimulated by UK’s expertise in oil and gas and by existing opportunities for co-operation and exchange of best practice. British High Commissioner to Mozambique, Joanna Kuenssberg, accompanied the minister in the visit.

In the field of education, minister Klemens and the High Commissioner of Mozambique in the United Kingdom, Filipe Chidumo, interacted with Mozambican students learning different specialties on oil and gas.

The minister called on Aberdeen Lord Provost George Adam to strengthen partnership and co-operation between the municipalities of Aberdeen and Pemba.

In London, minister Klemens was welcomed by the FCO Minister for Africa, Tobias Ellwood, and also met Minister of State for Trade and Investment Greg Hands, and the Prime Minister’s Commercial Envoy to Mozambique, Richard Benyon.

The programme closed with meetings with international companies in the energy sector and a speech by the minister, organised by Chatham House - Royal Institute for International Affairs. The minister spoke about Mozambique’s context and interacted with British companies and experts.