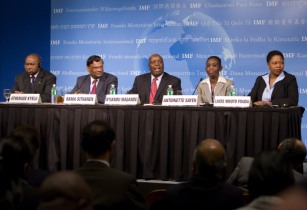 The International Monetary Fund (IMF) will support the resource-rich Central African Economic and Monetary Community (CEMAC) to deal with the economic challenges confronting their nations in the wake of plunging oil prices, security threats and civil unrest

“A sharp decline in commodity prices, in particular of oil, as well as security threats and civil unrest in the Central African Republic have profoundly impacted the region’s external and fiscal balances,” said Christine Lagarde, Managing Director of the International Monetary Fund, in a released statement following her meeting with the six Heads of State of the Central African sub-region in Yaoundé, Cameroon, on 23 December.

“Addressing the current regional imbalances requires a strong and coordinated policy response. I encouraged CEMAC leaders to intensify their collaboration to design and implement the economic reforms needed to reestablish macroeconomic stability in each country and the region as a whole," added Lagarde.

“The IMF remains CEMAC’s partner in meeting its economic challenges," she assured.