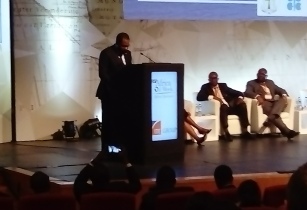 Mr Obiang Lima said that Equatorial Guinea joined OPEC "mainly because of Bob Marley". He went on to explain that Bob Marley's "Africa Unite" song had an important message about unity across the continent.

"I want to thank my brother ministers, I want to thank Nigeria and Angola who urged us to join OPEC," he told the ministerial panel event, which included energy ministers from Côte d'Ivoire, Ghana, Mali, Namibia and Nigeria.

He went on to explain that Africa could be seen as a real force at OPEC if it worked together: "Imagine if Africa was one country - it would have 1.216bn population, next to China, oil [production] would be next to Saudi, maybe even higher, with gas, Qatar would be a small player, we'd have power plants to run the entire continent, [African] LNG could supply all Europe so there would be no need for Russian gas, we would be a serious country of OPEC, the most powerful country in the world."

"Even if Africa was five countries, we'd still have power," he told the conference. "My conclusion is that joining OPEC is important."

"One small country can't make much difference but all our countries together led by Nigeria, Angola and Algeria can," Mr Obiang Lima said.

He urged all African oil countries to attend the next meeting of OPEC and non-OPEC countries, which will be held on 30 November in Vietnam.

"I encourage other African countries to participate - then they will take us seriously," he said.

The LNG2Africa project is another way for African countries to work more closely, according to the minister. Equatorial Guinea, Burkina Faso and Ghana are partners, along with OneLNG and Gunvor. He added that progress is being made in regard to more African countries joining with Angola and Mali's membership under negotiation and future discussions planned for Morocco, South Africa and Guinea Conakry to join.

"They are all mining countries, they all need power for industry, they are buyers of electricity," Mr Obiang Lima said, emphasising the importance of using African natural gas for domestic power projects, which has been a theme of the conference so far.