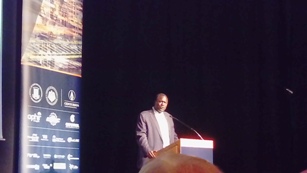 HE Ezekiel Lol Gatkuoth, South Sudan's petroleum minister, reassured delegates at the Africa Oil & Power Investment Forum, held today in London, that the country's oil facilities are secure and investors should not be deterred

In a candid address, Minister Gatkuoth said that while South Sudan has experienced unrest as it establishes itself as a nation seven years after gaining independence, the government keeps the country's oil installations secure and this is a separate issue to the political situation.

"Politics? Leave it to the politicians," he told delegates. "When you come to South Sudan, you need to be a pure company that doesn't have a hidden agenda."

CNPC, the Chinese state-owned petroleum company and a major investor in South Sudan was cited by Minister Gatkuoth as a good example: "CNPC [is in South Sudan] purely to do business ... They don't ask: 'How is the political situation?' or when we are going to have an agreement with the rebels."

His message to potential investors is: "You'd better be with me in my difficult times so I can with you in your good times ... we can fix the country together."

Minister Gatkuoth said that investing in local content is important if South Sudan is to boost production levels. The country reached peak production in 2011 at 350,000bpd with current production at 130,000bpd and a goal of 280,000bpd. It is the only oil producer in East Africa.

"Seventy per cent of South Sudan is unexplored, there are three operating companies [SPOC, DPOC and Nilepet] who have the potential to produce - the whole country is floating on oil," he told the conference. "We are big on land but small on population with only 12 million people."

Negotiations are in progress between the South Sudanese government and two majors, Total and Tullow in regard to two blocks.