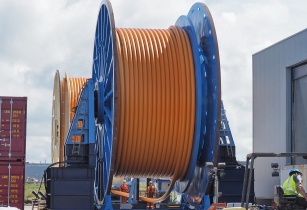 Airborne Oil & Gas, a manufacturer of thermoplastic composite pipe, has been awarded a large contract from a supermajor through Oceaneering International Inc to supply Thermoplastic Composite Pipe (TCP) flowlines for deployment in West Africa

It is believed to be the first TCP solution of this type utilised in the region and expected to save the operator up to 40 per cent on total installation costs.

The contract builds on a long-standing relationship between Airborne Oil & Gas and the E&P business on the qualification and deployment of TCP and marks a significant milestone for Airborne Oil & Gas in supplying TCP for permanent subsea applications.

Under the contract in West Africa, the manufacturer will provide the supermajor with a four km, 7.1 inch ID, 160 bar design pressure TCP Flowline for water injection replacing existing corroded flowlines in the field.

Martin van Onna, CCO at Airborne Oil & Gas, said, “This is an important milestone in our company’s history as we believe it to be the first TCP Flowline to be installed in West Africa, marking the breakthrough of TCP technology in the subsea market in this region. From now on, any asset director, country manager, buyer or engineer can simply choose a ‘no corrosion’ solution to be manufactured, installed and deployed quickly and cost-effectively.”

The total installed cost of TCP has proved to offer significant benefits to the operator’s pipeline replacement projects, particularly for water injection lines which often suffer from corrosion.

Paul McCafferty, vice-president Europe and Africa at Airborne Oil & Gas, added, “The lightweight nature of TCP means that our client can install the flowlines from its existing field support vessel, without the need to bring in a dedicated construction vessel. This provides an estimated 40 per cent reduction in the total cost of installation.

“Combined with the low operating costs associated with using the non-corrosive TCP Flowline, this demonstrates the significant potential of the use of TCP in Africa and other brownfield markets around the globe,” he stated.