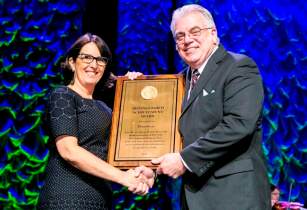 Petrobras has received the OTC Distinguished Achievement Award for Companies, Organizations and Institutions — the highest recognition to an offshore operator

The awards ceremony took place at the Offshore Technology Conference (OTC), which is dedicated to offshore oil exploration and production, in Houston

Accepting the award on behalf of Petrobras, exploration and production director Solange Guedes highlighted the importance of the recognition for the company’s technical staff and partnerships, as well as the roles performed by suppliers and the academic community.

“Pre-salt exploration and production has been a challenging mission, which we are carrying out in close collaboration with our partners, suppliers and the technical and scientific community. This award is the result of joint work based on an extensive network of cooperation,” she added.

Guedes also revealed that, eight years after the discovery of pre-salt was announced, the new oil province already accounts for more than 20 per cent of Petrobras’ oil production in Brazil.

The executive stressed that all the CO2 produced in the pre-salt is being re-injected. “As a result, we have avoided the emission of one million metric tons of CO2,” she said, noting that this initiative increased the volume of oil gas extracted from the fields.

The director recalled the challenges posed by pre-salt, located 300 km off the coast, without any installed infrastructure at the time of the discovery, and lying under a thick salt layer at a total depth of up to 7,000 metres.

“This context represented a great opportunity to develop enabling technologies together with the industry. We realised that innovative solutions would be needed to extract oil from these fields in a safe, profitable and environmentally sustainable way,” she added.

OTC has been taking place at NRG Park in Houston, USA.