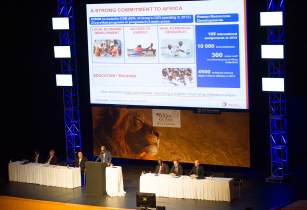 The conference brings together oil and gas players from across the continent for building insider knowledge, peer networking, gaining current exploration and production insights, launching new ventures, entering bid rounds, plus relationship-building and securing direct exposure with emerging partners and financiers, and with the continent’s core state and private oil and gas decision-makers.

More than 40 of the continent’s national oil companies will be present at the event, along with a number of international state and private oil companies operating in Africa’s oil and gas sector, or interested in its vast potential. Total number of exhibitors is expected to be more than 150 and there will also be more than 120 speakers at multiple seminars, speaking about a range of topics specific to the region and the industry.

Among the highlights will be the 2016 Licensing Round Launch from Congo (Brazzaville).

Organised by Global Pacific & Partners, this year’s conference will be the 22nd edition of the annual event and will be held in Cape Town, as a part of Africa Oil Week. It is being held from 26 – 30 October 2015. More details can be found at www.africa-oilweek.com.