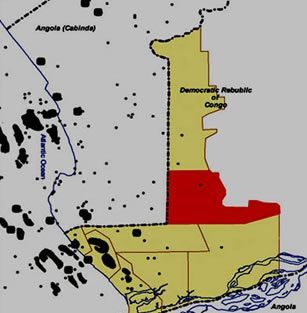 ENERGULF RESOURCES HAS reported on its projects, Block 1711 Offshore Namibia and the Lotshi Block onshore in the Democratic Republic of Congo (DRC).

Block 1711
NAMCOR, (the National Petroleum Corporation of Namibia) has been appointed by the Block 1711 Joint Operating Committee, as interim operator replacing Sintezneftegaz Namibia Ltd. as the operator.
Sintezneftegaz Namibia Ltd. has transferred its interest in Block 1711 to Nakor Investments Ltd, a company affiliated with Sintezneftegaz/Sintez Group of the Russian Federation.
It is now anticipated that the geophysics/ geology work program required to evaluate the Kunene #1 well data and correlate it to the existing 2D and 3D seismic should commence in the near future.
This work program will evaluate the Kunene, the Hartmann and other potential prospects on the block to better understand their hydrocarbon and reservoir potential, as well as to determine possible drill locations.
Block 1711 which comprises 2.2mn acres, is situated in the Namibe basin off the northern coast of Namibia along the international boundary with Angola. EnerGulf has a 10% working interest in Block 1711.

Lotshi Block
The Company had previously announced it had entered into a contract with China National Administration of Research Institute of Coal Geophysical Exploration (CGE) to conduct a seismic acquisition program of the Lotshi Block to further define the prospectivity of the block and to identify optimal drill targets, and that preparatory work to prepare for the survey was underway. CGE has been delayed in commencing operations on schedule.
EnerGulf is in negotiations to contract with other seismic companies, as it is assumed CGE is not able to fulfill its obligations.
EnerGulf has achieved the following milestones concerning its Lotshi Block work program: Completed its Environmental Impact Study required for operations on the block; has organized its office and operations in the field to conduct the seismic program; has secured various necessary equipment for the operation; performed dynamite testing; identified its base camp; completed its demining assessment; surveyed the true boundaries of the block and gained government approval; received its Exploration Permit from the government; reprocessed over 300 sq. km of existing 2D seismic data utilising state of the art processing; planned the lines for the seismic program; acquired an aeromagnetic and gravity survey of the block and has begun a more detailed and state-of-the-art evaluation and enhancement of those surveys; conducted various meetings to coordinate with the local authorities and population.