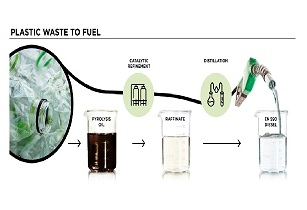 This process has now proven its effectiveness at a pilot plant in Slovakia. Since both plastics and fuels consist mainly of natural gas or crude oil, transforming one into the other has major implications for sustainable and lucrative fuel production.

VUCHT is part of Duslo, a leading Slovak producer of fertilisers, nitrogen specialty compounds, and rubber chemicals. A pyrolysis process is used by the institute to convert a variety of plastic waste collected in the country (such as polyethylene, polystyrene, polypropylene and PET) into diesel fuel.

The process thermally degrades the plastic at temperatures above 300°C (530 °F) and converts it into liquid oil composed of various compounds of hydrocarbons. The institute has recently developed a proprietary technique to further transform the liquid oil into a high quality fuel distillate known as winter diesel.

VUCHT plans to expand the method in a custom-built demonstration plant with a fuel distillate capacity of 40 metric tonnes per annum (MTA), after intensive pilot testing proved the technical viability and economic appeal of the process.

HYDEX E is an economical selective catalyst for hydro-dewaxing isomerisation specially developed for highly paraffinic feedstocks. The main advantages of this zeolite-based catalyst is that it has the ability to significantly increase fuel quality and yield, while minimising costs and formation of by-products.

HYDEX catalysts have been successfully used for catalytic dewaxing at numerous refineries around the world for more than 25 years, and are recognised to be highly favourable for middle distillate feedstocks, such as diesel.