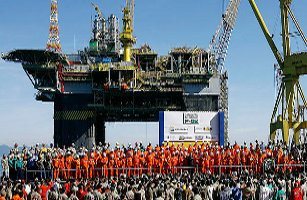 The prolific pre-salt reservoirs found in Brazil were deposited when Africa and Brazil were joined, and the same horizons exit on the African side oft the Atlantic. Pre-salt reservoirs have long been part of Africa’s upstream success, with big onshore discoveries such as Rabi and M’Boundi in Gabon and Congo, respectively.

Angola’s long-awaited 2010 licensing round awards, announced at the beginning of the year, have added to the growing hype surrounding West African pres-salt.

Discoveries have already been made in the pre-salt in the onshore Kwanza basin. But there are still major uncertainties. The quality of the carbonate reservoirs being targeted in Angola is the main risk (similar to Brazil prior to the discovery of Tupi). Few wells have ever reached the pre-salt in deepwater Angola; the most recent was Mobil’s Baleia well in 1996, in Block 20.

Secondly the quality of the seismic imaging below the salt is such that companies awarded blocks in the most recent round will likely have to re-process existing data. In most cases, further 3D seismic needs to be acquired, which will probably begin later this year. Imaging techniques have advanced since the last seismic was acquired and the companies are confident of producing good quality images, helped by the fact that the pre-salt reservoirs in Angola are shallower than those in Brazil.

The key activity in the region will start with Cobalt’s first pre-salt well, to be drilled in Block 21, on two prospects: Bicuar and Cameia. Cobalt’s pre-drill estimate for the volumes on both fields is around 1.5bn barrels, comparable in scale to Brazil’s Campo basin pre-salt discoveries. The results of these wells are important for the plan. Even if limited hydrocarbons are found, the wells will still provide valuable geological information and derisk future wells.

Furthermore the results will be of interest not only to the companies recently awarded licenses in Angola, but also to those holding deepwater acreage in Gabon, Congo and Namibia, where the pre-salt play is believed to extend. Although Angola has garnered much of the attention, seismic acquisition has been compared and wells are planned elsewhere in West Africa.

Gabon faces similar risks to those in Angola. Reservoir quality is the main issue, although the reservoir rock is believed to be sandstone rather than carbonate. New 3D seismic was acquired in 2010, and a number of prospects have been identified. A well will be drilled on the block targeting the pre-salt in 2012.

Like Gabon, the pre-salt in Congo is a proven play onshore. The M’Boundi field is a 350mn barrel field producing from a pre-salt horizon. Prospectivity and uncertainty in deepwater offshore Congo are similar to that of Gabon. The main difference being that the offshore waters of Congo are much smaller than those of Gabon or Angola.

Namibia’s pre-salt potential has also been touted. Near-term activity is likely to be influenced by Cobalt’s results in Angola.

Beginning with Cobalt’s first well on Block 21, pre-salt activity in West Africa will ramp up over the coming year.