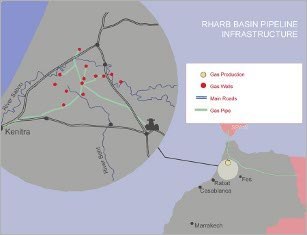 The construction phase of the new Sebou (DRJ)-Kenitra pipeline has been successfully completed. The pipeline is now undergoing pressure testing prior to commissioning and the start up of increased gas delivery to local industry, which is expected to be completed by the end of January.

Construction of the new pipeline has been completed on budget. The total length of the pipeline is approximately 55 km and has a design capacity of 23.5 mmscfd. The pipeline has been connected to seven of the ten potential producing wells, with tie-in for the remaining wells scheduled for completion during the first quarter of 2012.

These wells were discoveries made during the two previous drilling campaigns in 2008/09 and 2010/11.